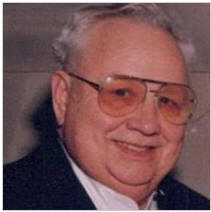 Jerry is a Holy Family High Alumni, class of 1950. An Army veteran, He went on to serve with the 7th Infantry Division in the Korean Conflict. He was a life member of Veterans of Foreign Wars Post 495. A former Post Commander 1971-1972, where he attained the Prestigious Award of “All- American Post Commander.” He retired as a Flight Operations Specialist from Army Aviation Support Facility #2 in Rickenbacker, OH. Jerry gave to many local and national charities. He was supportive, loving, and humorous.

Friends may call from 2pm-4pm on Friday, March 16, 2012 at the SCHOEDINGER NORTHWEST CHAPEL 1740 Zollinger RD.
A Memorial Service will be held at 4pm Friday. In lieu of flowers, Jerry suggests, “Do a good deed for a friend in need,” or offer contributions in his memory to Charity Newsies, 4300 Indianola Dr., Columbus, OH 43214. Visit www.schoedinger.com to share a favorite memory of Jerry.