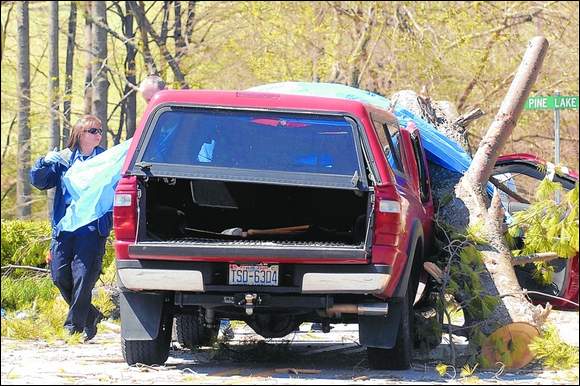 He was the son of the late Robert Clell Sedgwick and Betty Jo Rea Sedgwick. He was a graduate of Ohio State University. He lived in Fletcher, working at Rockwell International before moving to Troy, Mich., where he retired from Arvin Meritor to return to Horse Shoe. He was an Army veteran of the Vietnam War.

He was an avid golfer, champion Monopoly player and a member of the Hendersonville Elks Lodge BPOE 1616, the American Legion in Hendersonville and Brevard, and the Vietnam Helicopter Pilots’ Association.

Memorials may be made to the charity of the donor’s choice.

Jackson Funeral Service and Crematory is in charge of the arrangements.

Chaos reigned across Henderson County on Monday as a violent wind storm uprooted trees, broke branches and ripped down power lines. In Etowah, a tree fell on a pick-up truck, killing the driver.

The wind storm, with winds approaching hurricane speed, toppled a large pine tree onto a passenger truck on Turnpike Road near Pine Lake Drive about 11:25 a.m., killing the driver. The N.C. Highway Patrol identified the victim as Gregory Sedgwick, 59, of Granite Falls.