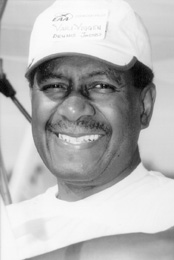 Dennis Jacobs was born in January 1, 1937 in Detroit, Michigan. He was a graduate of Cass Technical High School and went on to attend the University of Detroit.  He graduated in the mid-1960s with a degree in mechanical/aeronautical engineering.

Dennis and his wife, Deloria, and daughter Diane, moved to Yellow Springs in 1966 where he was employed at Wright-Patterson Air Force Base as an aerospace engineer. After five years at the base, he gained experience and test results to become a Licensed Professional Engineer in the State of Ohio.

Denniss’ desire to change careers inspired him to return to school to pursue a degree in Optometry. He graduated with a Doctor of Optometry degree from Ohio Stat University in 1975. He did graduate study in Ocular Therapeutics at Ferris State University in 1989. During his career he practiced optometry in offices throughout the state of Ohio.

Dennis’ varied careers were mainly a means to an end, for his true passion was flying. He began flying lessons in his teens and obtained his private pilot’s license in 1957 at the age of twenty. In fact, Deloria was his first passenger. Dennis became interested in homebuilt experimental aircraft in the 1960s. His first airplane was a Jurca Tempete which took twelve years to build. His second airplane was a delta wing, rear engine design called a Veri Viggen, which took sixteen years to build. His third plane, a Barracuda, was completed and ready to be painted when he passed. He held a commercial multiengine license with an instrument rating in airplane and helicopter.

At forty he was accepted into helicopter training and was the only Afro-American and the oldest pilot canddate in his class at Fort Rucker, Alabama. Upon graduation, he returned to the Reserves where he flew Hueys, then transferred to the Ohio Army National Guard where he flew Cobras. At that time he was a forty-three year old captain. He retired from the Ohio Army National Guard at age 60 with over 2000 hours of rotary wing time.

Dennis died on June 16, 2002 in a plane crash while flying the Veri Viggen (as a result of a partial power failure on take off) at an airshow in Urbana, Illinois at the age of 65.

Dennis can best be described as creative, inventive, and eclectic. He was a devoted and loving husband and father, as well as a loyal friend.