Aircraft assigned to the Ohio AASF #2

The Hiller UH-12, derived from the Model 360 two-seater of 1948 with a 180hp Franklin engine, occupies an important place in the history of the American helicopter industry in the fifties. Stanley Hiller Jr., who built the aircraft, was something of a whiz kid, in that he designed and built his first helicopter, the XH-44, in 1944 at the age of only 18. It was the first efficient American helicopter with coaxial, contra-rotating rotors. The later Hiller 360 leapt to fame in the summer of 1949 when it made the first transcontinental commercial flight. With an uprated engine and new UH-12A rotor blades, it was purchased by the US Army and Navy for battlefield evacuation and observation tasks, with the designation H-23 Raven, whilst the Navy ordered the same basic model as the HTE-1 for training.

Its successor, the H-23B, powered by a 200-210hp Franklin engine, was the first version used by the US Army as a trainer. A considerable number were built: 216 were assigned to the Primary Flying School at Fort Walters and another 237 were used for various tasks.

The UH-12B normally had skid or flotation gear, but a wheeled undercarriage was fitted to a batch ordered by the US Navy (the HTE-2). In 1955 a new variant, the UH-12C, appeared. It retained the 200hp Franklin engine, but had all-metal rotor blades and a “goldfish bowl” cockpit canopy. From 1956, 145 were delivered to the US Army as the H-23C. A purely military version, the OH-12D, flew on 3 April 1956 and 483 went to the US Army. The Franklin engine had been replaced by the more powerful 320hp Lycoming VO-540, and the transmission had also been changed to increase the service life of the helicopter.

The commonest version of this sturdy little helicopter was the UH-12E which had a more powerful engine. The US Army replaced nearly all the OH-23Ds by Hiller 12Es, designated OH-23G. In 1960 the Model E4 was developed from the Hiller 12E, with a longer cabin to seat four and an anhedral stabilizer on the tail boom. Twenty-two of these were acquired by the US Army as the OH-23F, for geodetic research.

The last civil variant, which appeared in 1963, was the Hiller 12L-4 which was also used as a test-bed for a PT6 turbine, but the project was taken no further. 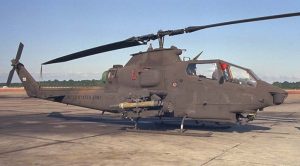